This is one of a series of Turbo Failure Fact Sheets from Diesel Levante.

Why does oil leakage damage turbos?
Turbochargers can spin at over 6,000 revs per second (360,000 rpm) and endure temperatures of 950°C. The turbo relies on the thin film of oil that lubricates the bearings on the turbine shaft. This oil is kept in place by seals for the turbine and compressor ends of the bearing housing.

These seals are unlike conventional oil seals, and similar to piston rings. They need positive air pressure inside the compressor and turbine to keep oil lubricating the bearings and prevent it seeping into the end housings. A restriction on the inlet side will create a vacuum that will to pull oil past the seals at the compressor end housing.

If the engine idles for long periods, the turbo will rotate at very low speed with correspondingly low air pressure. The resulting vacuum will cause oil to seep into the turbine housing. Either situation results in insufficient oil for the turbine bearings.

What causes oil leaks at both the compressor and turbine end?
• Any restriction in the oil drain pipe from the turbo to the engine.
• Restriction in the engine breather.
• Physical damage to the turbo’s rotating parts, and excessive bearing clearance.
• Repeated hot engine shutdowns leading to carbon deposits (coke) in the centre housing.
• Incorrect turbo fitted. 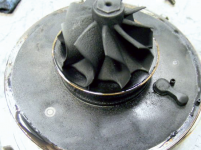