This is one of a series of Turbo Failure Fact Sheets from Diesel Levante. Safeguard your reputation and your business – make sure you read them all

What is the EGR Valve?
The EGR (Exhaust Gas Recirculation) valve directs a small amount of exhaust gases back into the inlet air charge, and lowers the maximum temperature of the burning fuel. The valve ensures the EGR system is disabled at idle, when it would otherwise lead to erratic idling, and at peak power, when adding exhaust gases would reduce power output.

The EGR valve is likely to stick and become coked up on some applications. This can have a significant effect on the performance of the turbocharger. A faulty EGR valve can result in excessive carbon/soot at the turbine end. This could cause the VNT mechanism to stick. It is important to check the EGR valve is functioning correctly.

If the EGR Valve does not open:

Possible reasons why the EGR Valve does not close
• Heavy deposits on tappet or valve
• EGR valve damaged through overheating, due to:
– incorrect control
– high exhaust back pressure
– non-opening blow-off valve (for turbocharger)
• Air flow meter or other sensor signal faulty
• Intake pipe in the EGR system partly constricted by deposits
• Oil leak from turbocharger

EGR valve which is malfunctioning due to excessive carbon / coke (fig.1) 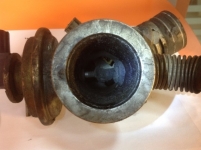